Q3 was better but not to the point of reversing the tide, 2022 should end up slightly negative for CIS

The CMOS image sensor (CIS) market is looking for growth

The CIS market has been in a slow growth pattern since 2021, and a rebound is now impatiently awaited. This time, growth should not be driven solely by mobile. Computing, security, automotive, and industrial markets are all improving their share. While we expect a small -0.7% YoY negative growth in 2022, the importance of image and video capture has never been greater across so many applications. Artificial intelligence (AI), either to enhance or analyze images, is fueling the CIS industry with renewed use cases and customer interest. Accumulated inventories from covid-times created a temporary bubble, which is still being cleared. Despite headwinds such as shortages, raw material inflation, and geopolitical uncertainties, the semiconductor industry has become an economic beacon for all major economies. CMOS image sensors have become a significant segment within the semiconductor industry and have become fundamental products for OEMs in search of differentiation. We remain cautiously optimistic for the future, as consumers maintain an appetite for smartphones and cars loaded with CIS content. 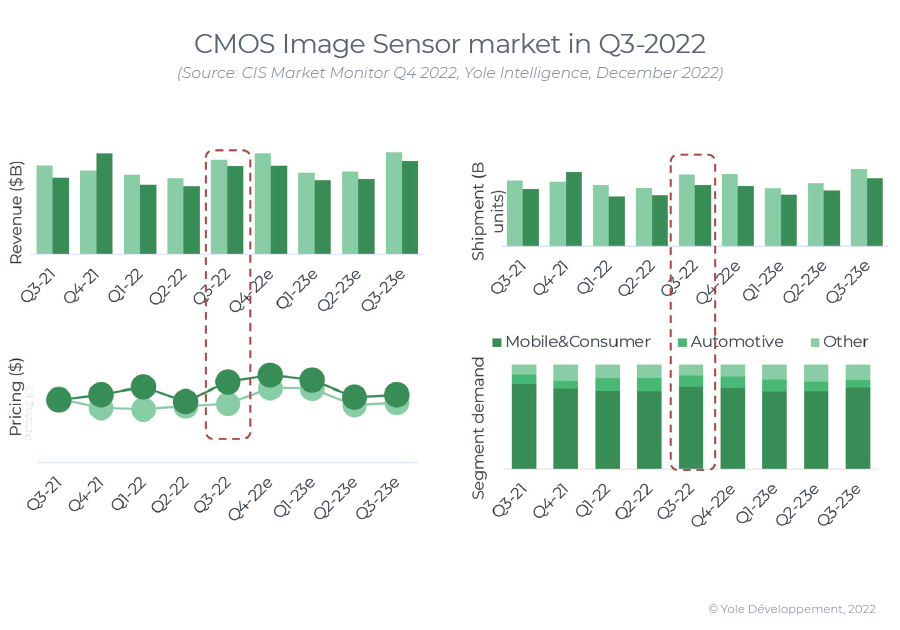 Technology is back at the center of the CIS competition, with Samsung and OmniVision closing the gap with Sony regarding the ability to deliver stacked image sensors. Stacking technology allows the manufacturing of high-resolution image sensors in tiny camera packages ideally suited for mobile and consumer applications. This involves manufacturing image sensor wafers and logic wafers separately and then stacking and connecting them at the micrometer level. A logic wafer technology race has therefore been unleashed. This lithographic node race has gone down to 22nm and even 17nm has been announced, raising the cost of manufacturing. The reignited pixel size race is enabling image sensors beyond the 100Mp mark. New types of sensors, such as iToF, dToF, event-based, and quantum, are igniting passionate debates about the future of imaging and sensing. The future of image sensors is evolving extremely rapidly, and technical mastery is a critical ingredient to competition. 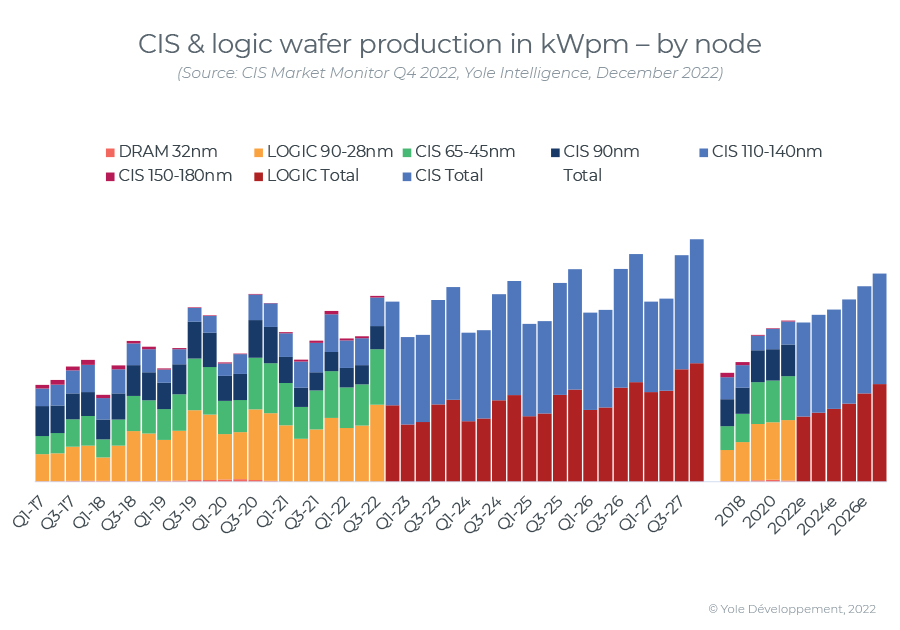 An ecosystem more vivid than ever

The market field is slightly more open than 3-5 years ago when Sony was the overarching player. We currently observe a more diversified value proposition from the largest CIS players able to compete in high volume, namely Sony, Samsung, OmniVision, STMicroelectronics, SK hynix, and GalaxyCore. This has resulted in a stabilization of the average selling price, which we expect to remain due to customer appetite for larger, high-quality image sensors. The equilibrium between the established leaders, Sony and Samsung, and the rising Chinese companies OmniVision,  GalaxyCore, and Smartsens will depend greatly on the U.S.-versus-China trade dispute. The large investments in new capacity will help, but the situation for 200mm wafer products remains constrained. This CIS market monitor will help you grasp the dynamics of the industry and steer your company and investments with up-to-date intelligence.

for a first Quarter Trial
Book a demo