Google catches up to Meta and Apple, chasing a consumer market estimated at 47 million units in 2027

How we do it

Outlook for AR and VR

Major players are fighting it out

Every company is pushing to make Consumer AR a reality. Facebook signing an exclusive deal with Plessey for a supply of microLED microdisplays for AR illustrated the interest in this new display technology. In early 2022, we saw Google acquiring Raxium, a microLED company, for a reportedly estimated $1B. Interestingly, they also acquired the IP of Jasper Display, a company providing backplanes for microdisplays. This mainly shows two things: firstly, Google has become increasingly assertive, trying to catch up, proving that we are getting ever closer to AR: it is not too far away; secondly, one cannot consider microLEDs by themselves: backplane technology is of the utmost importance, and Snap’s acquisition of Compound Photonics is yet another sign of this. With Snap, ByteDance, Meta, Google, and the like becoming even more engaged, and the 2023 milestone in mind, we understand that AR is becoming a major strategic initiative for everybody. The strategies are, however, completely different: from Snap and ByteDance being the content providers, Apple and Sony trying to be everything to everyone by creating their own content with a clear roadmap, while Meta is not yet benefitting much from its feature-rich ecosystem. This is a global battle driven by the major players, with smaller technology providers here and there trying to make the most of it.

We maintain the proposition that the supply chain is setting itself up in line with expectations of a tipping point in the AR market by 2023. We are seeing the first generation of headsets with limited capabilities, but glasses with acceptable performance and form factors still requiring disruptive technologies are only expected around 2023-2024, once the OEMs start shipping. They will probably be expensive and at low volumes, but they will make a statement as a brand and also serve as development kits to develop the use case. 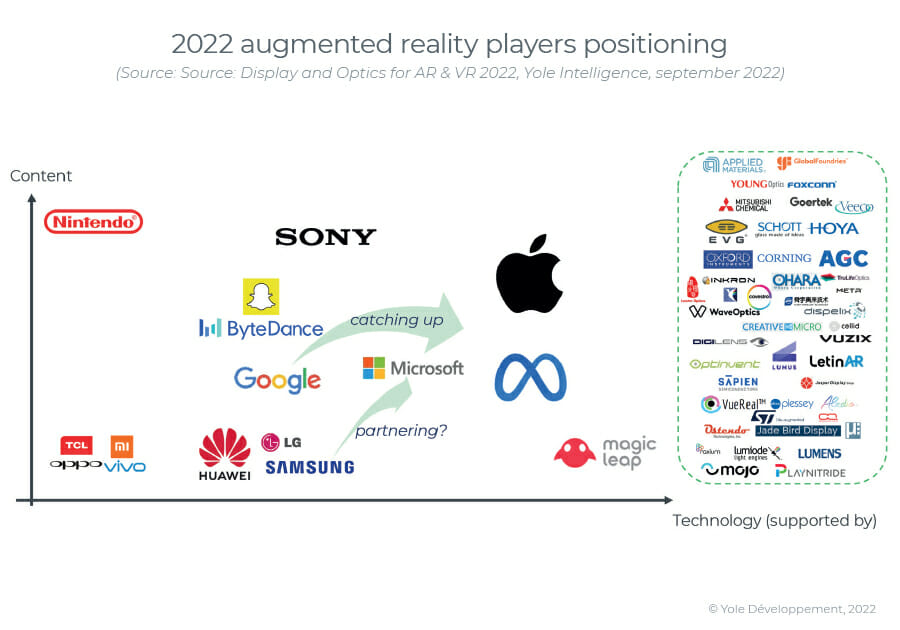 A technological ecosystem still varied and shaping up

To jump the gap for the next consumer electronics revolution, many technological difficulties need to be overcome, for there is no bypassing the laws of Physics. We consider the optical engine as the display engine together with the associated optics. For the former, incumbent projection technologies were chosen (LCOS, DLP) for lack of a better choice, still bulky and not providing an acceptable form factor for the consumer. While OLED-on-Si cannot deliver the required brightness for a day-to-day live use case with acceptable optics, the microLED dream continues. MicroLEDs could, theoretically, deliver the desired level of performance with an acceptable form factor, though much effort is still needed to improve efficiency, light extraction, driving compensation, color conversion, and so on. JBD is shipping products, proving that microLEDs are not only a promise. And the recent acquisition of Raxium by Google brings even more light to the technology.

LBS was “pushed” or “brought to the forefront” by Microsoft with the Hololens 2, and has been trying to consolidate its position, further advertised by ST Microelectronics and their partners from the LaSAR Alliance. We believe that LBS will serve as a transitory technology while OEMs wait for full-color single-panel microLEDs to happen. But LCOS will remain the go-to technology at first, especially with the intense efforts around making them less bulky (Magic Leap, Avegant).

In the meantime, the optics - which we maintain for the greater part will be based on waveguides as they provide the form factor the consumer is asking for - have been improving steadily. Work continues on improving the performance in terms of FOV and efficiency, but it looks like an acceptable level has already been reached. The bigger challenge is now around reducing cost. Possibly glass panels with a fusion process? 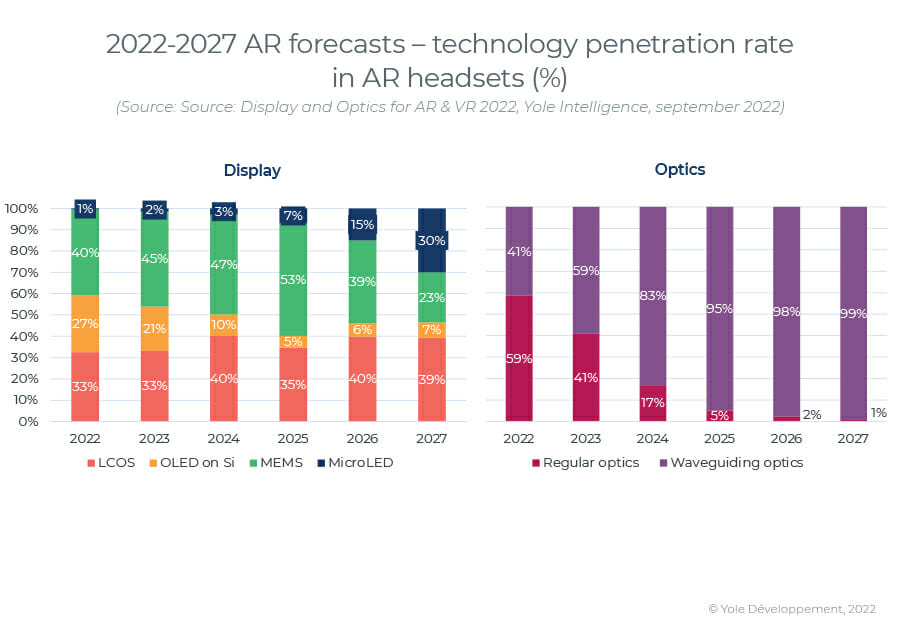 A market that is meant to exist, but once again: where is the use case?

For the consumer market to thrive, it needs more than just hardware providing a high-quality image in something that looks like a regular pair of glasses. If the result simply consists of putting a smartwatch screen in front of the eye, it is probably not compelling enough. Much like VR, there is a need for real disruption in the use case. That being said, we still envision a market that will start slowly, but still provide 47 million headsets by 2027 for the consumer market with an overall CAGR of 108%. This is a best guess based on our analysis of other disruptive consumer electronics history. And we stand by that, as long as a compelling use case is provided at the end of the day.

Will it be provided by the so-called Metaverse? Of course not; we do not believe this is more than a hype word to create activity because, this is nothing really new compared to the comments about “social VR” when Oculus was acquired. Or compared to what some consumers can already experience in Second Life and VRChat, and the former was not created overnight.

We need to keep in mind that this is a vision still driven by the technologists and not yet by the consumer. Business stakes are enormous with Meta, Apple, Google, and the like. That said, it’s a technology still looking for an application; things are not yet set in stone. Systems exist, and there is a little bit of traction here and there, but we are far from Jarvis’ vision of Iron Man. Of course, when we get a headset that is light, easy to use, and with a long battery lifetime, we will get an application, but so far, everything in AR remains an investment in technology development. 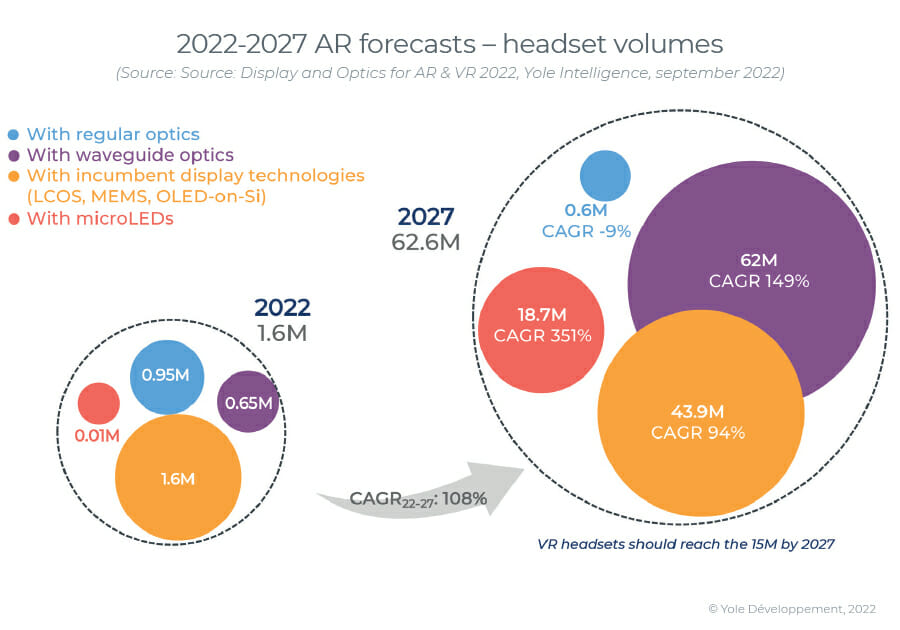