Semiconductor technologies will enable increased mobility and communication for the soldier of the future. This market will reach $17.5B in 2030+.

Scope of the report 7

Although the usual narrative states that the world has enjoyed peace and prosperity since the end of World War II, in reality global military spending has grown from $17B in 1949 to $1,868B in 2019. Wars, of course, never really ended – and as Clausewitz wrote: “War is the continuation of politics by other means.” Though the rivalry between the USA and China is the main topic of today’s geopolitical scene, there are hotspots everywhere. Furthermore, the expansion is not only geographical: Space, internet, social media, and the electromagnetic spectrum are new domains where militaries are preparing to fight.

In this context, the equipment and semiconductor technologies of infantrymen have adequately evolved. Inherited from the Vietnam War, infrared is a major technology of infantrymen, as is radiofrequency for communication and, more recently, for electronic warfare at the tactical edge. Other technologies, such as sensors and exoskeletons, have not developed as much.

Yole Développement’s Future Soldier Technologies 2021 report presents a detailed description of semiconductor technologies for infantrymen: their applications, players, and markets (including infrared and radiofrequency), as well as sensors, batteries, exoskeletons, and future technologies.

Our analysis predicts that the global market for infantry equipment related to semiconductor technology will evolve from $9.1B in 2020 to $17.5B in 2030.More details are available in the report. 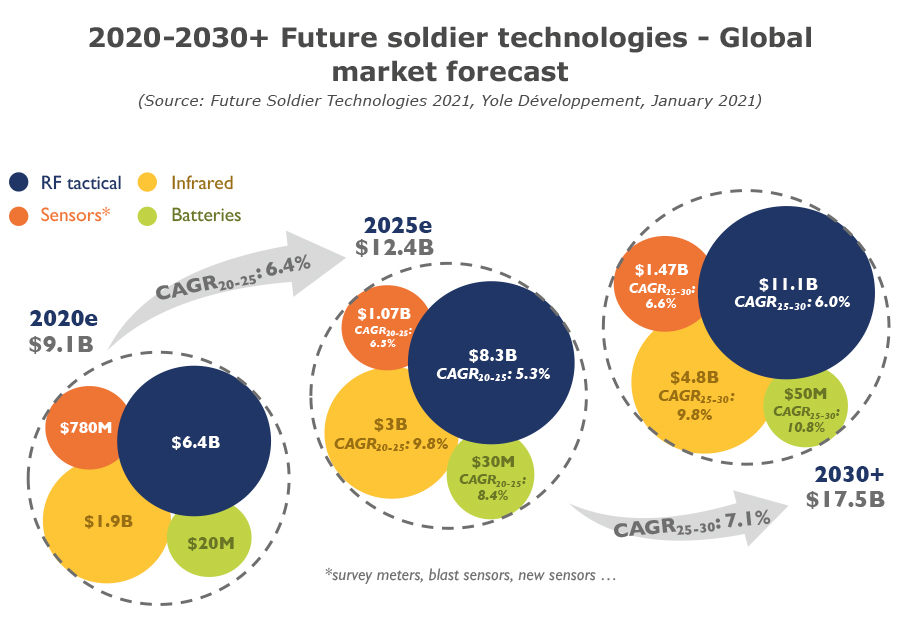 FROM NIGHT VISION TO THE  ELECTROMAGNETIC SPECTRUM

“Operational environment” is a key concept in military operations. It defines the platforms and technologies used on the battlefield. Choosing the wrong operational environment for a conflict can dramatically affect its outcome. By the end of the Vietnam War, the major military powers started to develop and adopt night vision devices thanks to technical progress made in the 1970s. During Operation Desert Storm in the 1990s, night vision was a major advantage for the US military and many operations occurred at night. As a result, for five decades, infrared technology has been one of the most important military technologies.
But what is the next operational environment?
At the end of the 2010s, during the War in Donbass, the Russia military was able to defeat Ukrainian operations without firing a single shot. Powerful electromagnetic devices suppressed communications and command, jammed GPS, shut down radars, and grounded aircraft operations.

While electronic warfare and cyber operations are increasing, we may witness the convergence of communication, electronic warfare, cyber, and space domains. The future soldier will take part in all of these operations, fighting with the use of computing and electromagnetic technologies.

Contrarily, technologies related to other operational environments have not developed as much. Nuclear power has remained a deterrent technology and survey meters have not multiplied. Apart from the Japanese Aum Sect and incidents in the Syrian civil war, the use of biological weapons has been minimal, resulting in limited development in chemical sensors. Around 2050, it is expected that infantry technologies will evolve more to human/machine fusion, be it for brain-computer interface, ocular enhancement, auditory enhancement, or muscular control. However, we should remember that war is all about the unpredictable.

The report presents a detailed description of semiconductor technologies and their applications for infrared and radiofrequency equipment for soldiers, as well as other devices including sensors, batteries, exoskeleton, and future technologies.

THE COMPLEX CONNECTIONS BETWEEN DEFENSE AND CIVILIAN TECHNOLOGIES

The connections between military and civilian technologies are particularly complex. Obviously, any legal mean is good for conducting a military operation. However, technological advantage is often a way to achieve military dominance, leading to technologies which are military-specific – some of which may result in being used in civilian applications.

In the U.S., DARPA has a long history of forging public-private technology partnerships focusing on high-risk R&D, and then attempting to field dual-use technologies to boost U.S. military capabilities while sustaining the U.S. industrial base. For example, in the 1970s, ARPANET, the first wide-area packetswitching network implementing the TCP/IP
protocol suite, laid the foundations of the Internet. More recently, the DARPA Grand Challenge paved the way for today’s robotic vehicles.

In this respect, infrared is a good example. Infrared vision was first developed for the military and found its way to the battlefield during the Vietnam War through the AN/PVS-1 and AN/PVS 2 Starlight scopes.

These tools led to development of light intensifiers technologies which have found applications in the medical and industrial fields through endoscopes, X-ray imaging, and fluoroscopy equipment.
Likewise, software-defined radio (SDR), which was initiated in the 1970s by the U.S. Department of Defense, was a key technology of 3G mobile phones.

More recently, uncooled long-wavelength infrared (LWIR), which was first developed for defense, has been massively adopted in civilian applications. And in radio frequency applications, GaN has become a key semiconductor material for power amplification, prompting developments in the USA, Russia, and China.
These new semiconductor technologies, their relationship with civilian activities, and the companies involved in the field are presented in Yole new Future Soldier Technologies 2021 report.

Military technologies will continue to evolve, including in the semiconductor domain, until we possibly reach what Sun Tzu called the supreme art of war: Subdue the enemy without fighting.

Status of the MEMS Industry 2020