Key features of the report

Our micro-Light Emitting Diode (microLED) display report now features close to 9,000 patents from 480 organizations. Most existing display makers were late to the microLED game. Many were initially either dismissive of the technology, or unprepared to tackle its many challenges. Key MicroLED enabling technologies such as mass transfer and LED chips are far from display makers’ traditional core expertise. But in 2014, Apple’s acquisition of Luxvue put microLEDs on the map. Panel makers realized that it could someday become a credible display technology, disrupt the supply chain and challenge their position.

As a result, intellectual property (IP) activity and microLED investment have been increasing exponentially since 2015. All leading consumer electronic companies, panel and LED makers accelerated their microLED development efforts. By 2018, they were joined by equipment makers, material suppliers, and others who, as microLED edges closer to volume manufacturing, are seeing opportunities to serve the industry with dedicated tools and materials.

More recently, microLEDs’ position in leading panel makers’ R&D portfolio and technology roadmaps has started to move from defensive to strategic. Companies that have missed the Organic LED (OLED) opportunity, sometimes limited in their ambitions by the massive capital expenditure requirement or a weak intellectual property position, see in microLED a leveled playing field with a lower entry price.

MicroLEDs could rapidly become the dominant display technology in Augmented Reality (AR) glasses. In most high-volume consumer applications however, the risk that microLEDs will ever fully displace Liquid Crystal Displays (LCD) or even OLED remains low. Nevertheless, microLEDs’ unique features could guarantee a comfortable share in many high-end segments with attractive profitability and become a key income generator. 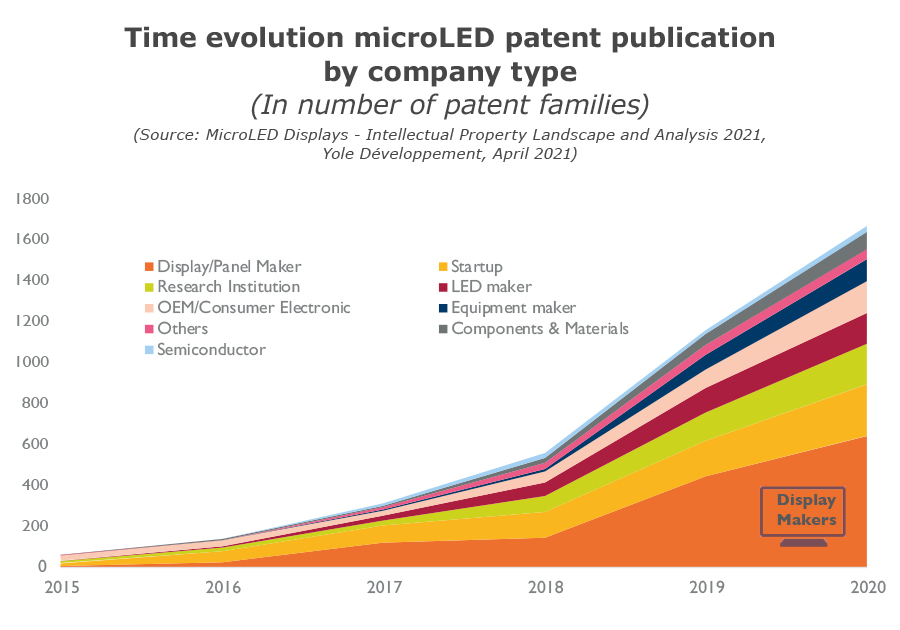 PANEL MAKER HEAVYWEIGHTS TAKE THE LEAD, BUT STARTUPS AND NEWCOMERS ARE READY TO CHALLENGE

Activity is strongly dominated by Chinese companies, followed by Korea. LG and Samsung made strong showings in 2019 and kept up the pace in 2020 in terms of new applications. Samsung made a remarkable push with more than 130 new patent families, revolving for the most around its Display division’s self-assembled nanorod LED technology, often referred to as Quantum Nanorod Emitting Devices (QNED). The patents show the technology maturing, and a commitment to tackle the challenges associated with moving QNED from the lab to the fab.

CSOT and BOE led patenting activity in 2019 and remained close to the top in 2020. With similar levels, startup PlayNitride, which raised another $50M in 2020 to expand capacity, plays in the same league as leading panel makers and OEMs. Aledia, which moved into a new R&D facility in 2019 and raised close to US$95M in 2020 to build a fab, is also accelerating its IP effort, inching closer to historical leaders such as XDisplay. Panel makers that were missing have now entered our patent corpus including Japan Display, CEC Panda, HKC and Sakai Display.

The field is getting crowded but there is still time for ambitious newcomers to build credible portfolios. In late 2019 and early 2020, Konka and Visionox announced plans to invest $365M and $175M respectively in mini and microLED development and production ramp ups. Konka only filed its first microLED patent in 2019 and Visionox in 2017, but both already have sizable portfolios of pending applications, some showing a surprising level of maturity.

Activity at Apple peaked in 2017. However, the quality and details of new applications shows how far the company’s technology has advanced. The acquisition of Tesoro indicates a focus that is shift or expansion toward enabling volume production rather than fundamental technology development. TSMC, which is expected to be one of Apple’s key partners, appears for the first time in our corpus. 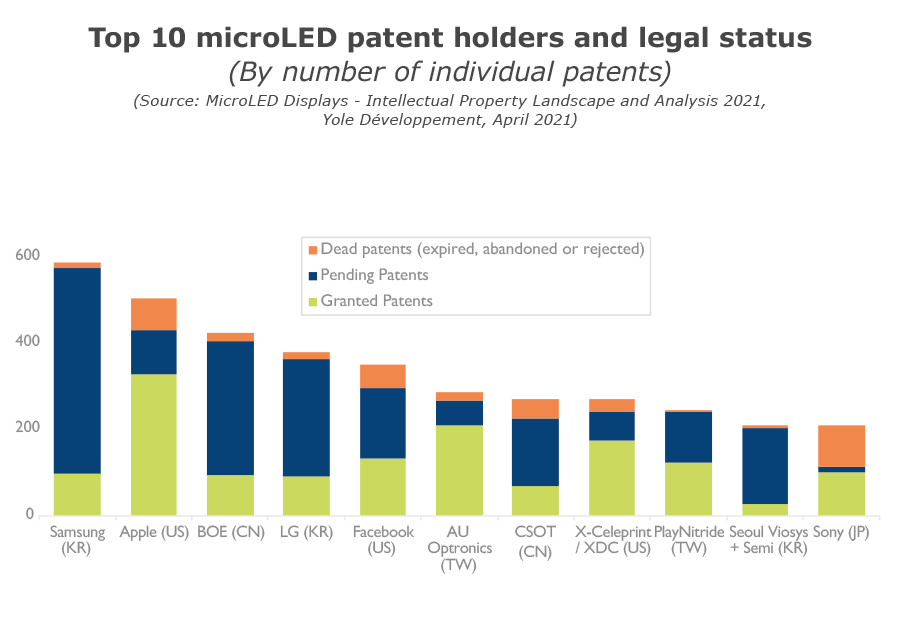 Many recent patents feel “closer to reality”, going deep into details of pixel bank structures and backplanes, or aiming at improving manufacturing efficiency. Detailed analysis shows that most of the IP leaders are moving beyond concepts and lab prototypes and tackling the challenges of bringing microLEDs to mass production. Inventors never seem to run short of new ideas to improve capabilities, cost of ownership, and enable freedom of operation in an increasingly crowded IP landscape.

New transfer processes keep emerging, exploiting materials’ contraction, expansion, phase changes or surface tension. Polymer stamps still lead, but laser-based transfer dominated activity over the last two to three years. The 2019 comeback of self-assembly was sustained in 2020. Notably, many of LG’s recent applications revolve around a technology ecosystem to enable its fluidic self-assembly process.  Transfer is only the first step. With bonding pad sizes and gaps shrinking below 5 µm, die interconnects are challenging at microLED scale. Effort on this issue is therefore accelerating.

Growing the three emitter colors on the same wafer is also a hot area. Pixel chiplets that integrate emitters and driving circuits into a microsystem with redistribution layers are on the rise. For AR or light field, optical multiplexing is an intriguing option worth monitoring. 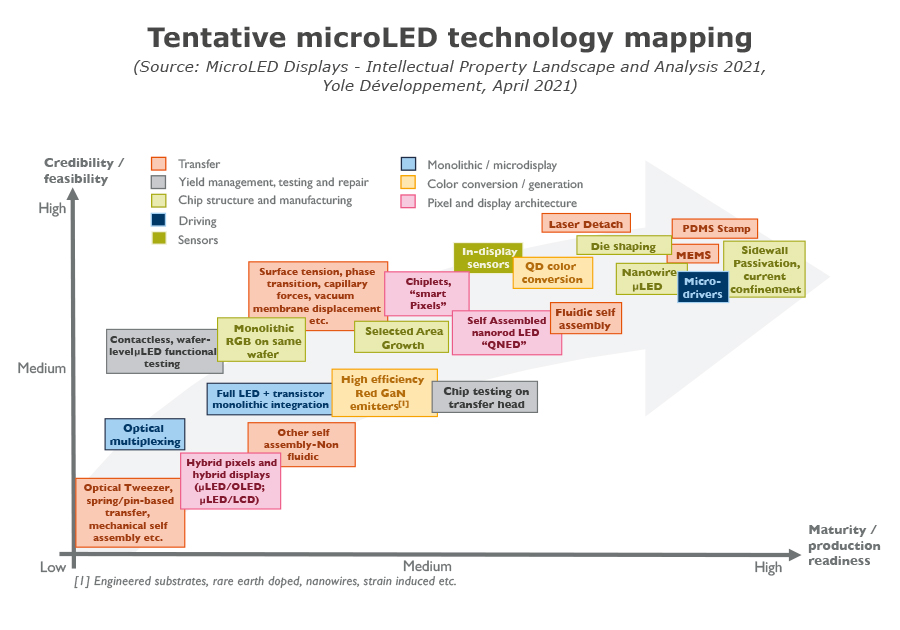 From backlights to direct view LED displays: MiniLEDs in 2022 and beyond – WEBCAST