Industrial, consumer, and automotive applications are driving the adoption of neuromorphic computing and sensing technologies. The first products are now hitting the market.

THERE IS A STRONG NEED FOR NEUROMORPHIC TECHNOLOGIES

Artificial Intelligence (AI) is hungry for performance, and Moore’s law dynamics will not suffice to cover the needs of the ongoing 5G/IoT/AR/Robotic revolution. Brute force is currently being used to leverage the power of AI, but this approach is not scalable. It will hit a heat wall, a data wall, and a cost wall related to the ability of the semiconductor industry to deliver at a certain pace (Moore’s law) the incremental cost to performance improvements. Current AI computing will not deliver, so what AI technology would be necessary? Neuromorphic computing and sensing solutions, drawing inspiration from what happens in the brain, have key specificities to compete within the existing AI landscape and constraints. These technologies will address most of the current challenges and could represent 20% of all AI computing & sensing by 2035.
Industrial applications will be the first to use neuromorphic technologies, driven by high speed, low latency, and offline learning enabling more autonomous features and performance. Players such as Prophesee, Brainchip, and Nepes AI/General Vision already have products in the market targeting industrial applications, and more players will follow in the coming years. The consumer market will also benefit from neuromorphic technologies enabling more AI applications at the edge on battery-powered devices, ensuring privacy and safety of personal data.
In the automotive market, increased integration of neuromorphic technologies will leverage the extremely low latency and power efficiency. While it will take longer for neuromorphics to be adopted in this promising market due to the long product cycle, some projects are already being announced, such as Xperi’s Driver Monitoring System and Terranet’s ADAS cameras and laser.
Additionally, the cloud server market could also benefit from neuromorphic computing technologies, leveraging low latency and online learning to improve the performance of applications such as cybersecurity and fraud detection. The considerable power efficiency could also help to limit the power consumption growth in data centers which is a growing concern. Large players such as Intel and IBM are already creating neuromorphic server prototypes by assembling their massively scalable Loihi and TrueNorth chips, respectively.

Current neuromorphic device architectures can also vary significantly with respect to the organization of the memory and computing components on the silicon chips. There is currently a clear trend towards “in-memory-computing” solutions: several companies are developing designs with mainstream embedded memory (e.g., SRAM) distributed across cores or neurons; various players are also considering the adoption of emerging non-volatile memory (NVM) elements assembled in crossbar arrays, leveraging the “synapsis-like” properties of resistive memories (e.g., PCM, OxRAM, CBRAM). Such memristive technologies are currently in development and could become viable solutions for edge neuromorphic devices by 2030. 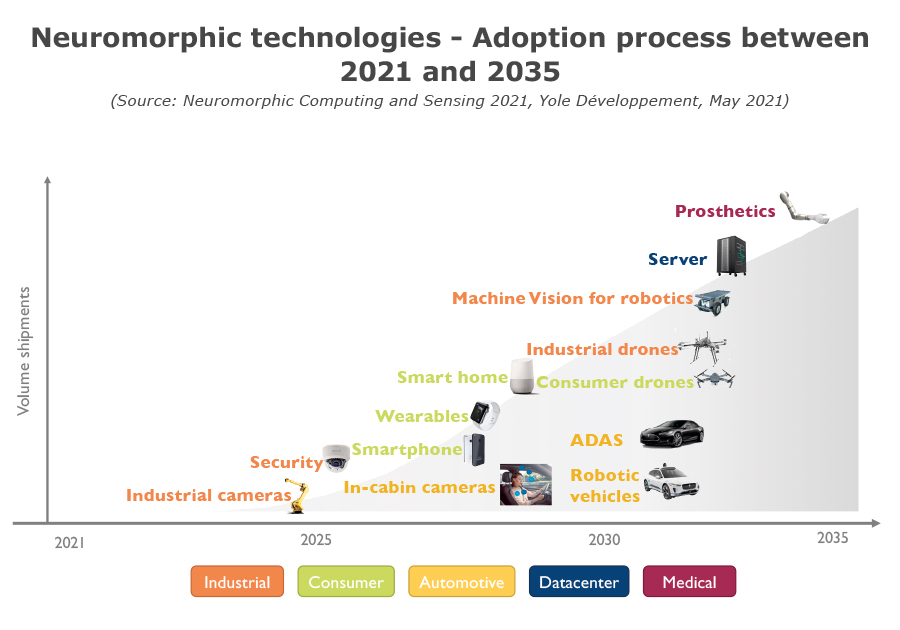 A SOLID AND DIVERSIFIED ECOSYSTEM IS GROWING

The neuromorphic ecosystem is today very dynamic with three main categories of players: university & research institute, labs affiliated with large companies, and start-ups. The latter are the first players to bring products to the market for edge computing, targeting industrial, automotive, and consumer applications. They will test new approaches in the market in a real-life environment.
From their side, universities are forming extensive collaborations, often supported by governments, to develop the technology and understand the hard-science potential. This covers a vast range, starting from a simulation of the brain on a silicon chip, and involves partnerships with various companies to develop proofs-of-concept in the field. Labs affiliated with large companies are deeply involved in these collaborations and often take the lead. Intel and IBM developed neuromorphic communities around their chips to help the software ecosystem grow, increase the maturity of neuromorphic AI, and test use cases directly with application players. 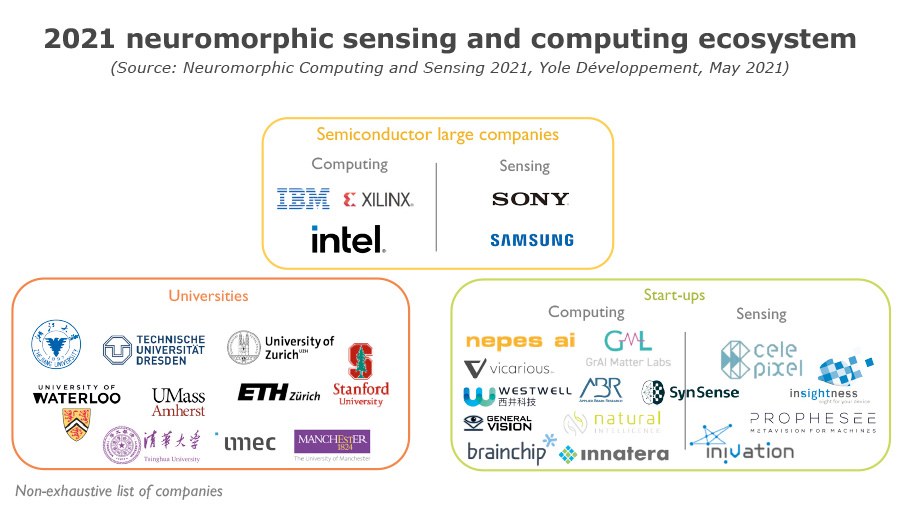 OVER THE PAST YEARS, SEVERAL KEY EVENTS HAVE OCCURRED

Many start-ups raised funds, such as Brainchip’s $21.5M in 2017, Prophesee’s $28M in 2019, and GrAI Matter Labs’ $29M in 2018 and 2020 combined. This was followed by the acquisition of several start-ups, such as Insightness by Sony and Cele Pixel by Hua Capital (OmniVision) in 2020.
Many products were also announced, such as Intel’s Loihi in 2017 and Brainchip’s Akida in 2018. Sony and Prophesee released an HD neuromorphic sensor in 2019, and Intel released Pohoiki Springs in 2020, reaching 100M neurons, which is currently available for researchers with a simple connection. Some companies will soon start hitting the market; Brainchip begins volume production of the Akida AI processor in April 2021, and the demonstration kit of Prophesee & Sony’s HD sensor will be made available in May 2021.
Finally, many projects with application players have also been announced. For example, Terranet and Daimler jointly released a neuromorphic ADAS solution in February 2021, and Xperi and Prophesee released an in-cabin monitoring solution in April 2021.
With regard to this accelerating surge of energy, we forecast that neuromorphic technologies will achieve enough maturity for a market take-off by 2025, first in the industrial and consumer market segments then quickly followed by Automotive.

Objectives of the report: