In advanced packaging technologies, wafer level packaging are becoming more and more popular due to its promise of providing smallest and thinnest form factor with reasonable reliability. Wafer Level Fan-Out and Wafer Level Chip Scale Packaging (WLCSP) or Fan-In remain two powerful wafer level package families. Unlike wafer level fan-out, WLCSP offers the most simplistic process flow while providing thin, small with eash of assembly while populating many System In Packages (SiP) or smartphone board assembly. WLCSP also offers BackSide Protection (BSP) while maintaining the same footprint as the die area. WLCSP also known as “Fan-In” packaging is expected to reach new heights driven by explosive growth of WLCSP form factors in smartphones, tablets, and wearable market in mobile and consumer segment. WLCSP package revenue is expected to surpass $2.5B threshold by 2025 driven by rapid growth in earbuds and smartwatch markets in addition to 5G deployment where many devices such as antenna tuners are leveraging WLCSP form factors. WLCSP platform offers package size as small as 1×1 mm to as large as 7×7 mm with low temperature dielectrics as new development in this arena. In addition to low temperature dielectric, another emerging trend in WLCSP platform is “6S” side mold protected package as offered by Deca Technologies’ M-Series product line. Deca’s M-Series offers superior BLR (Board Level Reliability) performance and many OEMs have slowly started to look at this novel approach where die is protected from all sides without “fanning out” the I/Os. This entails some level of price impact but many applications are being looked at due to better performance and less rate of field returns. Many OSATs also have started offering similar side mold process option to the customer with slightly higher price than WLCSP. WLCSP platform initially was used with high number of PMIC devices, however it has exploded to various switches, antenna tuners, RF transceivers, filters, wireless charging IC, some CIS devices, and NFC controller type applications. The breadth of application envelope provided by WLCSP platform is the most compare to any other packaging family with best cost structure and lowest cycle time. Majority of WLCSP volume is driven by smartphone demand as it remains the biggest consumer for this platform. WLCSP platform has replaced wafer level Fan-Out and FCCSP platform whenever it is feasible from performance and design standpoint. OEMs such as Apple has become the leader and driver to increasingly adopt this platform as a first choice of packaging given its lowest cost and simple process flow. New frontiers in WLCSP packaging remains to be side mold protection and low temperature dielectrics as well as providing larger die size support to 7×7 mm. This report includes a description of the applications using WLCSP and market revenues and forecast 2019-2025. It report provides in-depth analysis in terms of breadth of applications for WLCSP platform in addition to providing WLCSP units, wafers, and revenue forecast for specific market segments. It also provides WLCSP technology roadmap, key advancement and future trajectory of this platform. 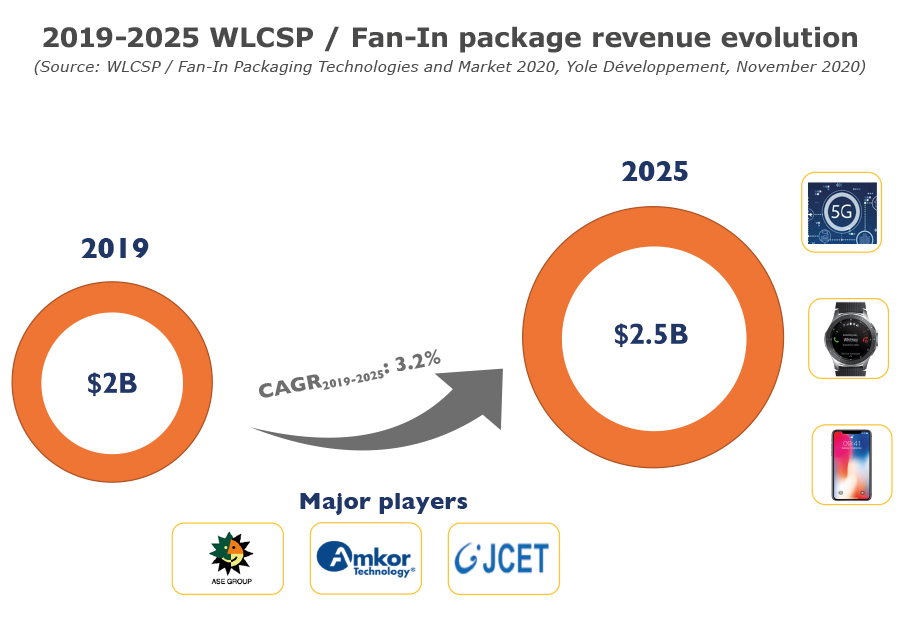 Initially in 2016, WLCSP players were many in terms of their global footprint, however due to increased adoption, cost pressure due to intense competition; this supply base has consolidated and strengthened to few top players such as ASE, Amkor, JCET, SPIL, PTI, and TSMC. Amkor, ASE w/SPIL, and JCET remain primary leaders for WLCSP market due to increased price pressure and very high-volume demand driving this to a more “commodity” market than specialized market such as fan-out packaging platform. There are multiple Chinese players actively participating in WLCSP global supply chain such as China WLCSP, and Huatian. Several IDMs such as TSMC, and Samsung has up-leveled their capability to provide turn-key wafer services to their customers as TSMC gains traction with InFO-x (Integrated Fan out product line) and can also provide WLCSP / Balldrop solutions to the customers. Samsung is also an IDM player to fulfil internal WLCSP demand for their smartphone product line. In addition to these IDMs, NXP, STMicroelectronics, and Texas Instruments also remain key players who fulfil internal demand through “make” models versus “buy” models through outsourced packaging house. As explained above, WLCSP has diverse supply chain across various IDM & OSAT models, majority of the market is governed by OSATs as it remains a price sensitive and fiercely competitive market. This report provides detailed look at each major player in WLCSP supply chain and details respective market share and key applications and process technologies supported by each player. 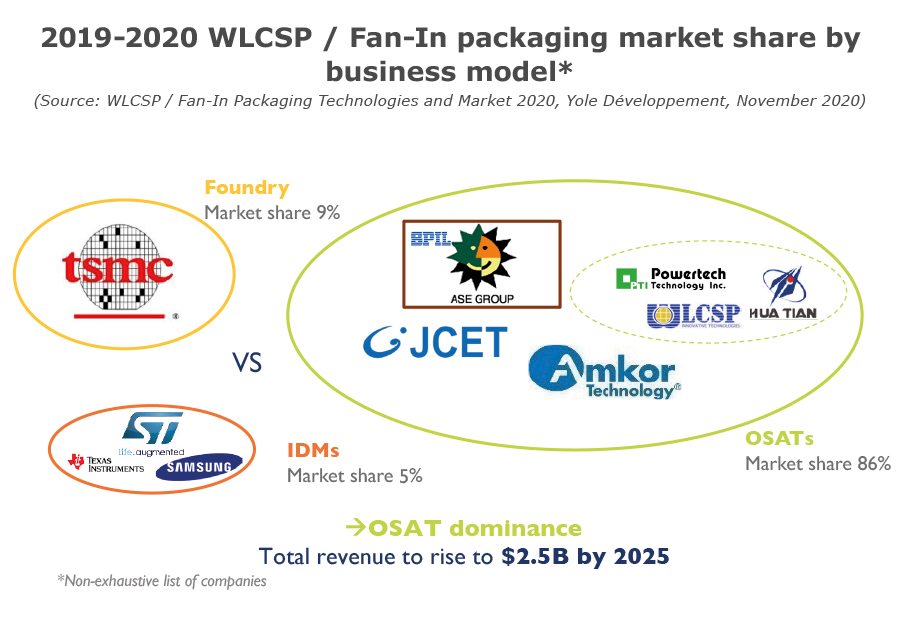 ROLE OF WLCSP PACKAGING IN ADVANCED PACKAGING ECO-EYSTEM: FROM PMICS TO RF TRANSCEIVERS AND BEYOND

Advanced packaging eco-system especially for small body size have several options such as WLCSP, wafer level fan-out such as eWLB, and FCCSP that requires the use of a substrate. Cost, performance, reliability, and ease of manufacturing are some of the key parameters that are looked at when deciding on a packaging platform for a given device where cost is given higher importance especially in the consumer market. Many of the power management devices such as PMIC and PMUs that were traditionally on FCCSP platform, now fully converted to WLCSP platform. Moreover, WLCSP is also gaining market share from fanout devices due to higher price of the fan-out and process maturity, simply growing the die size is also seen as an option where the back-end cost can be optimized with WLCSP platform. There are continuous trade-offs that the designer has to consider between WLCSP, Wafer Level Fanout, and FCCSP platforms. In many “simpler” devices with relaxed ball-pitch and number of I/Os are involved, WLCSP is the optimal packaging platform satisfying many of the major criteria mentioned above. Given these benefits, WLCSP will continue to grow at ~3% CAGR for next few years as the phone OEMs have already pushed by boundary of maximizing WLCSP package usage in many devices as evident in latest iPhone 12 and previous generations as well. It also will discuss this competitive position of the WLCSP platform. It also provides comparison of WLCSP to other key competing platforms such as wafer level Fan-Out (FO) and FCCSP technologies and highlights attributes of WLCSP packages that make them attractive choice for OEMs. 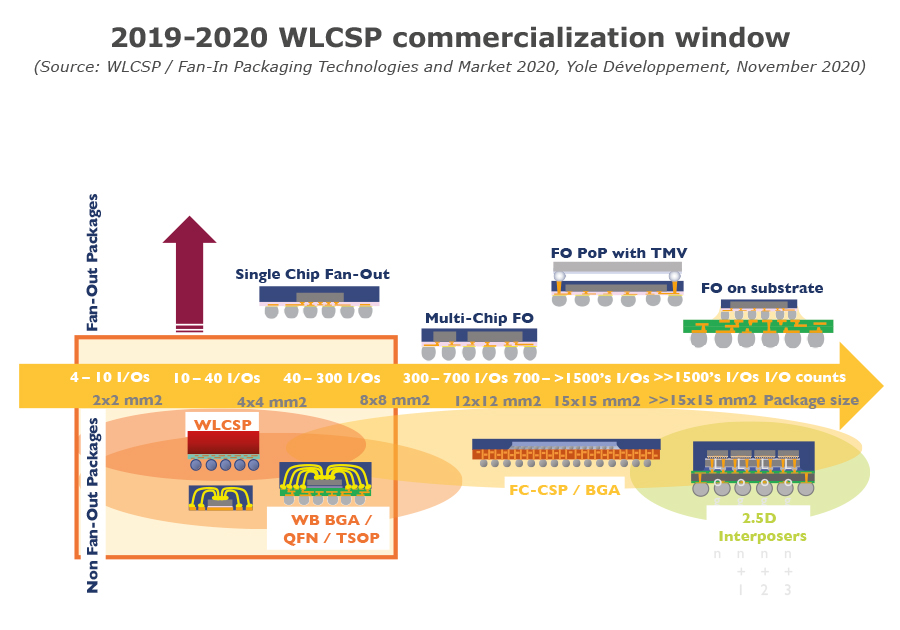 Key features of the report

Objectives of the report

The main objectives of this report are: