HOW TO DISCRIMINATE BETWEEN PRODUCTS IN A BOOMING MARKET ?

Fueled by multiple drivers, including the need for a large number of temperature measurements of people due to COVID-19 as well as surveillance, the market for infra-red thermal imaging cameras and modules is expanding at a rapid pace. In fact, our partner Yole Développement expects an 8% compound annual growth rate from 2019 to 2025 (CAGR2019-2025). Many new players, especially from Asia, have already started to disrupt the market.  In order to make appropriate choices, therefore, users, integrators, and sensor manufacturers need to be able to discriminate between marketed products based on accurate and independent assessments of their performance and features (benchmarks).

As there is hardly any independent infra-red camera or module performance data available, purchasers of such systems are left with datasheet values that might not always be right or may provide only limited information.

Carried out by a team of experienced optical and system engineers, this technical report relies on robust and comprehensive test protocols and thorough analyses of the test results. The outcome of this process is a set of typical performance indicators, such as responsivity, NETD, scene dynamic, operability…, leading to functionality assessment and image quality appreciation. Together, they make it possible for Piséo to develop its own benchmark procedure for thermal cameras, which enabled them to test independently the Flir Boson 640 Pro Camera.  The Piséo team outlines its observations: although fitted with a non-top-notch sensor but thanks to great software capabilities, the FLIR Boson 640 Pro appears to be a very versatile and high performing IR camera platform for many different use cases.

We did not investigate:

In order to characterize the camera performance, Piséo’s experts use their own test protocols, software, and lab equipment, which includes a calibrated HGH black body and climate chamber able to perform tests at ambient temperatures ranging from -20°C (-4°F) up to 100°C (212°F).

The Boson camera module is available in many options: size of imaging sensor (resolution), three accuracy options, 16 optics configurations. We have chosen to characterize the 640 Pro version, fitted with a 50° FOV optic, since it’s a successful representative thermal camera module used across professional, industrial and defense applications, where the trends are shifting toward higher resolutions. Piseo needed to develop an extensive process to assess the performance, starting with the ability to communicate with the bolometric sensor and to produce raw images using our own code. This first step allowed a set of typical performance indicators to be produced in a reliable and consistent manner, such as responsivity, NETD, scene dynamic, operability and others. These could then be compared with the rated data supplied in the FLIR datasheet and also with other marketed cameras. It was interesting enough to find a significantly higher NETD value (from raw data, without significant image processing and correction algorithms) than the one published by the manufacturer but also a significant number of bad pixels. Below are a few examples of graphs and pictures from the report that disclose some of our findings of the microbolometer sensor performance.

We also spent quite a lot of time  in understanding all the different functionalities and parameter set-ups that the camera presents. They appear to be quite extensive and reveal FLIR’s intention to offer to the market a very versatile platform for many different use cases. The drawback is that it requires from the user a very good understanding, therefore practice, of the features to be able to produce optimized images for specific applications. Our investigations also revealed how the correction functions and algorithms work in order to produce high quality images, despite the camera being built upon a mid-performing bolometric sensor. For instance, the signal-image is largely reworked and corrected by means of user-accessible functions, reducing thermal drift, pixel-to-pixel drift, optical and thermal environment perturbances, ultimately improving the NETD value. The ability to calibrate the sensor when equipped with different or supplementary optics or when subject to thermal out-of-field radiation effects is a great option to improve the performance when plugged into a reproducible situation. Below are a few examples of the report’s content. 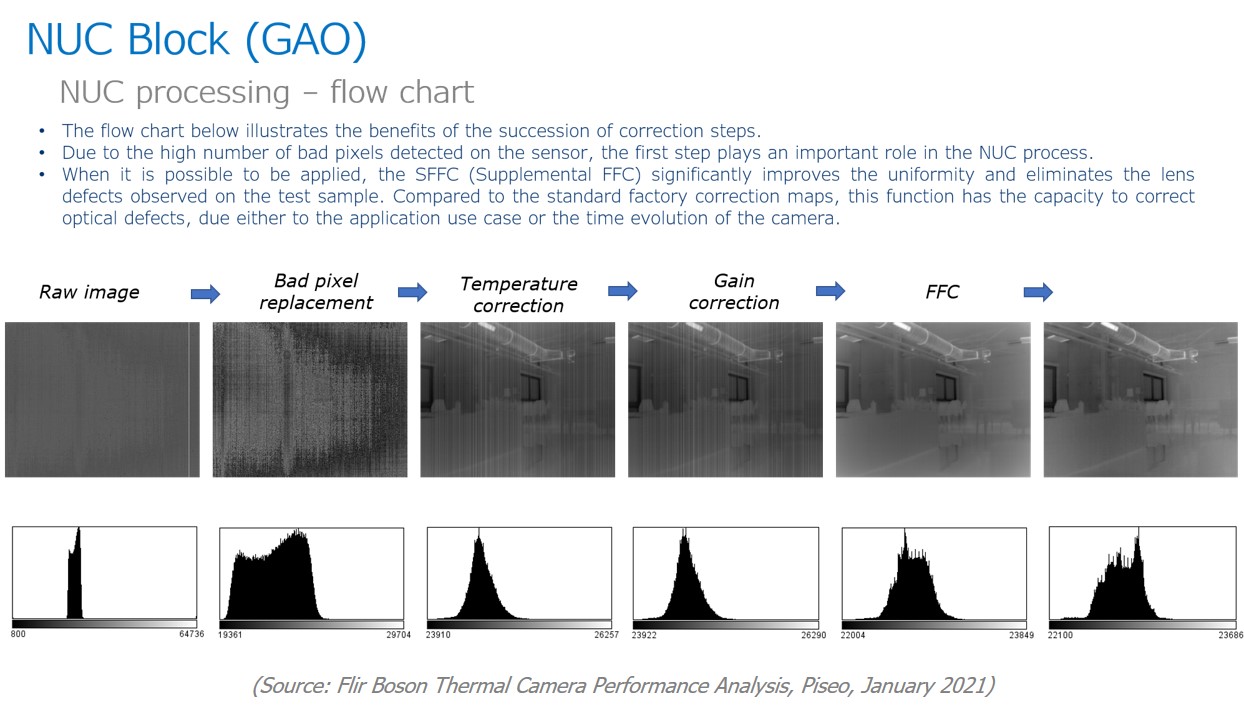 Altogether, there is a lot of information and much in-depth technical detail available in the report which will allow you to understand in detail, from the sensor to the image, the features and performance characteristics of the FLIR Boson 640 Pro camera module and how it leads users to create optimized pictures for their own applications. This will help you to understand how the sensor works and help you to make a choice between various products, by allowing you to compare with other marketed devices.

Objective of the report  4

Camera presentation, functionalities and use 11