Under-display use and wavelength shift based on new materials for consumer applications and strong growth of datacom bandwidth are driving the VCSEL market to $3.9B in 2027

The VCSEL market, driven by consumer and datacom application could reach $3.9B in 2027

In the past, the vertical cavity surface emitting laser (VCSEL) market was driven by datacom applications, the technology’s first volume application. In November 2017, Apple released the iPhone X embedding VCSELs for face recognition. This changed the game. In 2018, the mobile and consumer market became the largest market for VCSELs, reaching $440M. Other smartphone makers followed the same trend but stopped using such components a few years after in favor of under screen fingerprint sensors. Apple remains almost the only player integrating VCSELs. In 2022, the VCSEL market has almost doubled compared to 2018, reaching $840M. But starting in 2023, the datacom market could take back the lead and dominate the VCSEL market in the following five years. VCSEL revenues for datacom are expected to reach $2.1B in 2027, while VCSEL revenue for mobile and consumer would reach $1.7B in 2027. 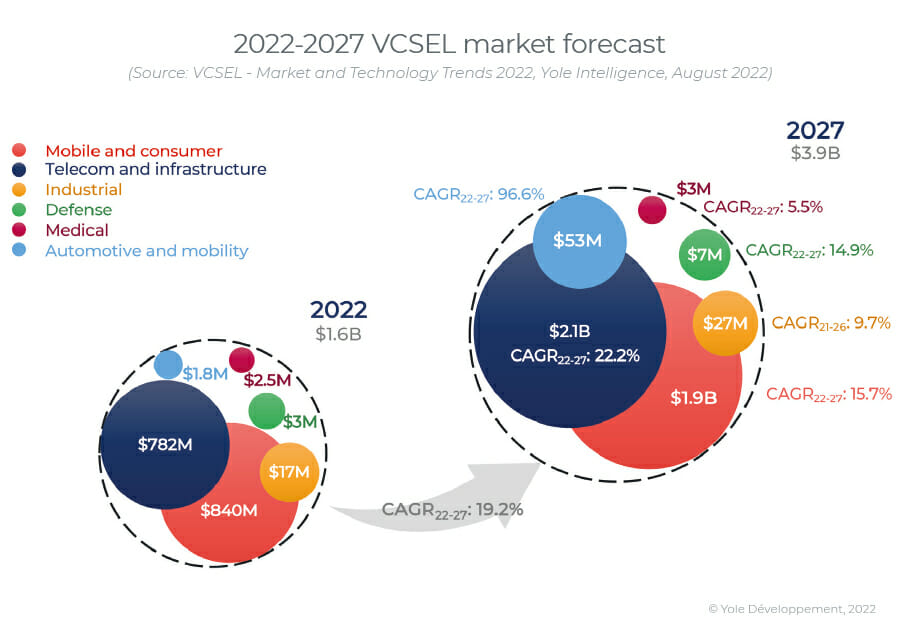 From an oligopoly to a duopoly in the VCSEL market

Since 2017, the VCSEL ecosystem has changed drastically. At that time, there was an oligopoly with a market, largely dominated by Lumentum, but several other players had significant shares of the market. In 2022, the VCSEL ecosystem changed and is now a duopoly. Lumentum and II-VI are now the largest players, with 80% of the VCSEL market. So, what happened in five years? Lumentum was the only supplier qualified by Apple at that time. Finisar was still in R&D and struggling to qualify products for Apple. Other players were involved with other smartphone makers or supplying tiny VCSELs for the proximity sensor. Then, II-VI acquired Finisar. These two players, Lumentum and II-VI, are still the only players qualified by Apple for 3D sensing. In parallel, the leaders also acquired other companies like Oclaro, Coherent and several others. This reinforced their positions in the optical communication market, vertically integrating from the VCSEL device to the entire transceiver module. 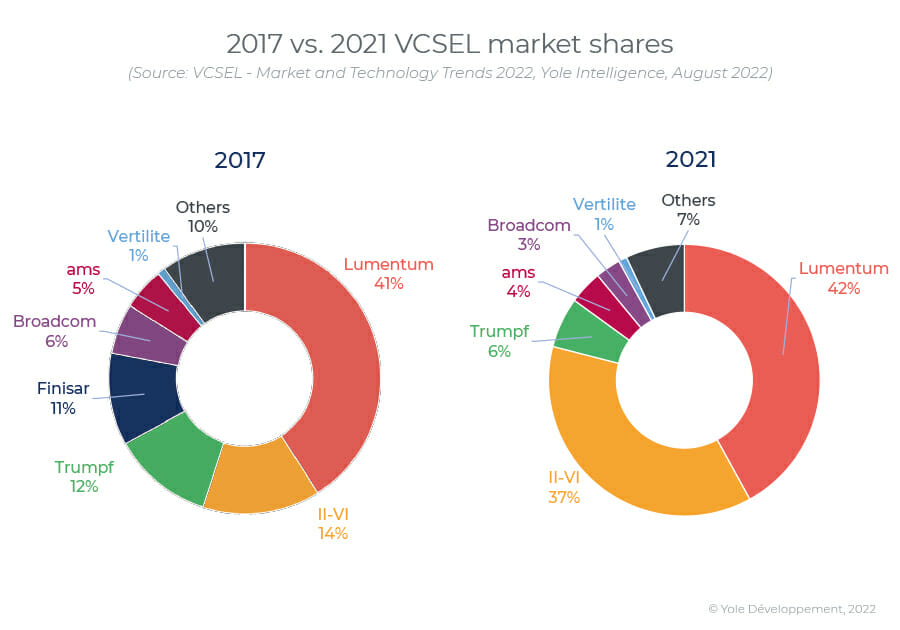 Since 2017, VCSELs in smartphones have evolved little. A transition from 4” wafer manufacturing to 6” wafers was necessary to satisfy the exploding demand from consumer players. This happened between 2016 and 2018. Two major changes are expected in the coming years. In May 2022, IQE demonstrated its first 8” wafers based on germanium instead of GaAs. These new wafers may not be needed to answer a sudden rise in VCSEL demand, but to make possible the integration of photonics devices with CMOS technology. It also gives a potential roadmap towards 12” wafer manufacturing in the long term. The second major change expected is a shift in wavelength from 940 to 1,380nm using a dilute nitride active layer. This shift is needed to achieve an integration of the VCSELs behind organic light emitting diode (OLED) displays, which are transparent at this wavelength. The first application could be the proximity sensor being placed under the display, reducing the size of the notch on iPhones. Further 3D sensing applications using such wavelength will happen later. 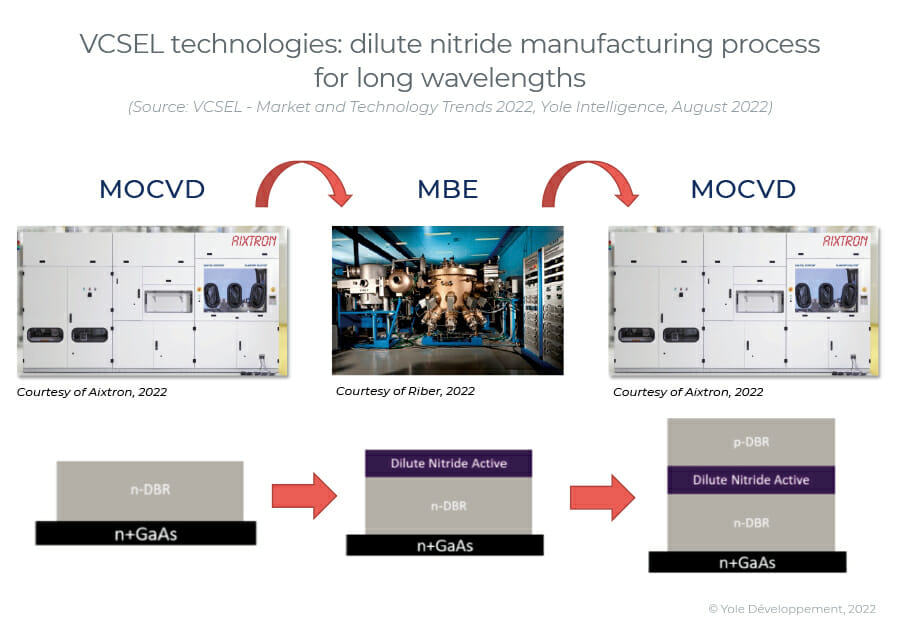